Do you have both a work phone and a private phone? Do you need to keep in touch with your usual number when you travel
with an international number?

Then you need a Dual Sim phone! That literally means you can put two SIM cards, with two different numbers, in the same device.

HOWEVER! There are several factors to be aware of:

So, simply look for "Active Dual SIM" in the specifications, right? Ha, not so easy! Strangely enough, even manufacturers get this terminology wrong. We have observed a surprisingly large number of Dual SIM devices, whose specs either completely lack any detail on the 2G/3G network capability of the second sim, or incorrectly call the device Stand-by when it is in fact Active, or vise-versa.

So here at MyMobile And UniqueMobiles, we have taken the safe route and tested the capability ourselves, and only if physically proven, award a device with the "Active 3G Dual SIM" - label,

according to OUR DEFINITION:

"Active 3G Dual SIM devices can handle take 3G calls on either SIM without having to change a setting in the device."

So don't get caught out - check our verdict before buying!

One last thing to consider: Hybred vs. Dedicated SIM-Trays

You can imagine all that tech takes up a lot of space in a product where space comes at a premium. That's why many phones use what is called a Hybred Tray that caters either for for the second SIM or a Memory Card (SD-Card), as you can see in the photo above and the illustration below. So if you want to use two SIM Cards and a Memory Card, look for a device that has a dedicated slot for all 3 cards. 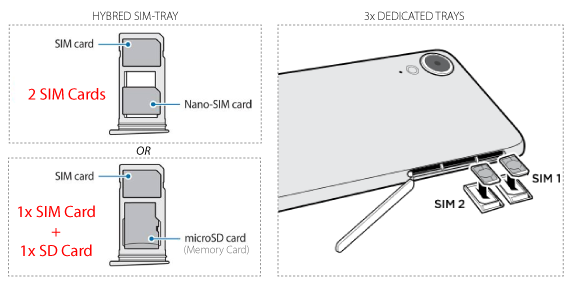 Confused yet? Don't worry, you're not alone. If in doubt give us a ring and we'll help you out as best we can.